More pics from our road trip to the 'new' Hoover Dam bypass.
This overlook is just west of the Dam and offers spectacular views of Lake Mead. 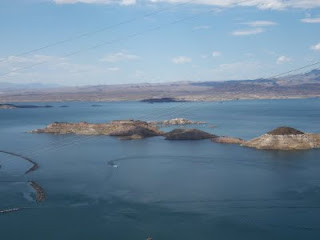 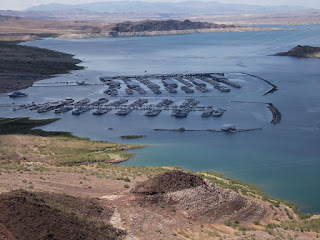 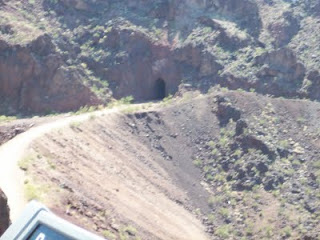 I was reading one of the interactive info boards and discovered this tunnel into the rocks was once used by the railroad.
Posted by Peg at 3:26 AM No comments:

I needed to give Traveler some extra room at his new home. Since he is the only horse there, the owner has pretty much given me free rein at the back of his property where horses can be kept. Last week, he suggested I use the panels he had stacked around and put them up. I decided I would need to use some of mine, too. 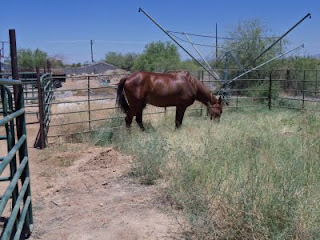 Before I could do anything I wanted to make sure there were no serious hazards under what had overgrown out there. It's been a while since anyone has whacked the weeds down, to say the least. It's more than knee high overgrown, and I couldn't see how the ground leveled or undulated. It might have had some deep holes Traveler might unwittingly step into and get hurt. Safety comes first.

I've been a little reluctant to go nosing around out there, though. Who knows what cast off debris was left lying around, what snake might have built a den or any other creepy crawly might who be in hiding. I had to grab some courage and long pants to go traipsing around out there. 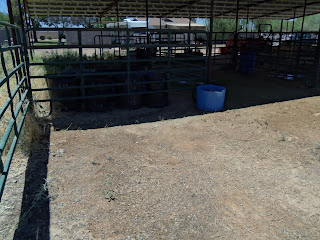 After inspecting the area and deciding it was safe, it took me just over an hour to push, pull, and drag eight panels into place and wire them together, and of course Traveler wanted to help. He had to follow me everywhere I went.

I spent another hour sprucing up the existing area and his cleaning water barrels. Voila, Traveler is a happy guy in his bigger place. It looks a little unsightly right now, but Traveler will eat it down in short order, and whatever is left I will pull out.
Posted by Peg at 2:50 PM No comments: