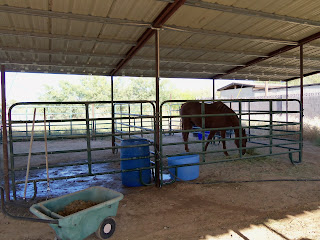 Sorry, it looks so wet. I'd just finished dumping his water barrels and cleaning them when I decided to shoot this pic (with my new camera). He has a double pen here only separated by a twelve foot section of fence that was tack welded to the poles. 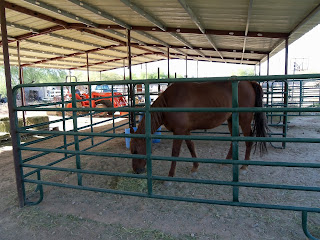 Here's another angle of his pen. I'm kind of sad he doesn't have some stablemates, but maybe soon. It was too windy and dusty yesterday to shoot pics of the pasture where I can turn him out. I'm hoping I'll be able to do that very soon.

He's settling in well, not calling for his old stablemates any longer. He does return a call if another horse calls. There are other horses right next door, too, but not where he can see them unless they're out in the large dirt pasture the next lot over.

I hear him whicker as I drive through the gate each morning and evening to feed, clean is his pen, and fill or clean his water conatiners. Of course, you know I've been spoiling him with treats the last two weeks, too. He loves his carrots. I'm finally getting the winter hair off him. It's taken two weeks of daily brushing (which he loves) to get him almost (what we call) slicked off.  It's been so dry here, he's full of static electricity. His mane and tail are starting to look better, too, I've had to put conditioner on them.
Posted by Peg at 1:16 PM