Just because you asked...Traveler's Grandson

This is the most recent picture ... it was taken just before sunset a few weeks ago. 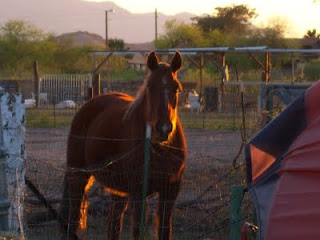 Trav (as he's affectionately known) is a blue registered Missouri Fox Trotter, though I don't know what good the blue registry does anymore since he was gelded as a colt. I guess it just means he has excellent blood lines...

He is 16.2 hands and turned 15 years old on April 16. I've had this big guy since he turned three. I did all his breaking, rating and training myself. He and I are pretty good buddies and been a lot of places together. He goes pretty much anywhere I ask him to go except into a two horse trailer. We've never mastered that, though he will go into anything that's bigger. He's been known to toss me on occasion, but fortunately I've not been injured, but that's not to say an injury couldn't happen sometime down the road. 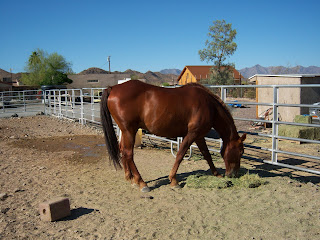 This pic was taken at my late friend Jon's place where he had an enormous pen all to himself. 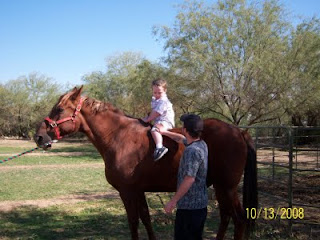 This last pic is of a girlfriend's son and her grandson, it gives you and idea just how docile he can be, though I'm not real certain he was sure about what was happening ...he's just nosey enough to like almost everyone. The little one, in the pic, was good enough not to squeal if Trav twitched a muscle...

I wish my camera hadn't been dropped last week and only taking fuzzies now (good for muffed target's I suppose) ... I'd have already been taking pictures of the new place he's going to be living. Guess I'll just have to borrow one... and keep y'all posted.
Posted by Peg at 4:36 PM