Winston and Minnie have returned safe and sound 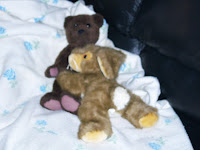 Yay! Horray! Winston and Minnie have been found at last! I thought surely they were gone forever. Last I remember I was giving them my tickets to the Democratic National Convention and wishing them well on their journey. They had passes to meet then candidate, Barack Obama. It was to be an exicting trip for them. I had no idea they had returned home from that trip and crawled exhausted into a box and gone to sleep.

I unearthed them today from a box conatining winter clothing, some miscellaneous sheets and pillow cases, and of all things, my heating pad. I can be assured they've been toasty warm all this time. Needless to say they were starving, so I fixed them lunch. Minnie had a hearty salad. Winston chowed down on one of my favorites, rib eye steak, medium rare.

Their other friend and companion, Mevlin wasn't with them. So, I had to ask what happened to him. They didn't want to talk about Melvin or the trip. I suppose it was so long ago. They did want to talk about what had been happening in my life. They were very concerned about my health when I told them. I assured them there was nothing to be concerned about today. I am well and healthy.

They like the new digs. Winston commented he especially liked the colors inside. He wanted to see out the window to get a feel for where we are now. He had told me more than once he didn't like that other place we'd been living. He thought it wasn't good enough for us. Minnie agreed. She seems to think I got sick because of that place. I might have to agree with her. I did not tell them about Curmudge. I want to save that news for a more somber time.

After they finished eating, they settled in to watch this afternoon's epsiode of General Hosptial. They were just about asleep when Nilly discovered they were here and decided to have a good sniff of them. Her snuffles startled them wide eyed and awake again. They shivered as she took her time, then Gibby came along. He wasn't so interested and went on his way after only a few moments. Both Winsotn and Minnie sighed. They were just about settled down when Puzzle decided to say her hello's. They were glad to see each other. The three had been friends a long time and before you know it, they were all having a cat nap.

I expect Winston, Minnie and I will be having more conversations in the next few days. I'm thinning out stuff, and packing some boxes to put aside for yard sales in the next few months. I hope they don't crawl into a box and get overlooked again. I have certainly missed their company.
Posted by Peg at 5:09 PM