First investigation in a new place

Well they've decided it's time to come out and investigate their new surroundings... 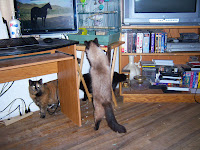 Oh yes, they discovered the bird cage. It was one of the first things they found. The birds went silent almost immediately and I missed a picture of Puzzle on my desk trying to disturb them. Usually, the birds are chirping cheerfully by this time of the day. 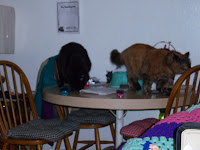 We encountered Jean's big cat, Jack. His growl reminded me of the #48 car racing around the track at 195 miles an hour. We found the dry food dish for Jean's cats, too. They have dry food of their own in the room I'm using. Somebody decided to upend the dish in the bedroom in the wee hours of the morning this morning... I wonder who? Usually, it's Gibby.

They discovered the litter boxes in the back hallway. There are two for Jean's cats to use. Mine have their own in the bedroom. I suppose the smells are new and different in those boxes.

We've pretty much investigated everything but we're not quite sure yet and they're sticking close to me, just in case of. I'm sure they feel protected against what ever lurks. Ah, the party is over... I've had to put them back into their safe place. They'll be fine now, I think.
Posted by Peg at 2:26 PM