My kitty's didn't have a particularly good day. One of Jean's little dogs trapped and terrorized them. I'd gone out to do an errand and wasn't gone long. When I returned, I discovered this little dog on my bed with Nilly and Gibby cowering in terror in the corner.

Whew! What a smell...come to discover both Gibby and Nilly had been so traumatized they'd had accidents. Poor Nilly was a mess, she would need a bath. Gibby had fared better but dashed from the room as soon as he could escape. Puzzle was missing. I did find her hiding behind the couch. 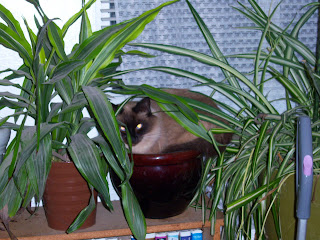 They'll probably never socialize with a dog(s) again.
Posted by Peg at 8:49 PM