NASCAR is coming to Phoenix...the week of November 12-14 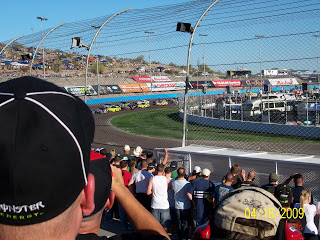 Phoenix International Raceway, also known as PIR to locals, is nestled in the foothills of the Estrella Mountains southwest of Phoenix about twenty miles. The surrounding neighborhood is quiet except for the two times a year NASCAR comes to the valley of the sun to visit.

Zoomtown is one of the largest fan based RV parking areas on the circuit and is within walking distance to the track. Zoomtown swells to more than one hundred thousand on race weekends and is the safest place to stay. It has it's own Urgent Care Facility and supermarket, so once you're there, there's no need to leave the track to go into town for gorceries, beer or whatever you need. It's all there for you. Turn out is always excellent. The last two years, PIR has lowered spectator seat prices to bring the fans out. The concept has worked well even in this poor economy, the fans come in droves.

There's always something happening in and around the track and Zoomtown during race weeks. You can choose from a variety of venues, pretty much anything you could want to spend money on, and it's not inexpensive either. It's simply what one would expect for any sporting event. NASCAR is no exception.

I haven't spent a weekend at Zoomtown, though it might be fun to do with a bunch of people just once. I generally get to the track early enough to find a decent parking space close enough to where my seats are and have time to wander through the all the vendors looking for something I might not be able to live without. In the past I have bought a few things to put into a scrapbook with other race week memorabilia. Yep, anyone who is a fan of NASCAR has favorites. I'm no different, I have mine too.

I've had seats nearly at track level and right across from pit road, and I've had seats on turn four where most of the wrecks happen when they're racing in Phoenix. Not that I'm a fan of wrecking, mind you. I could see more from this postion. Next time I go to the races, I think I'll opt for turn four again and splurge to get a seat higher up. It will be worth the extra dollars to be able to see almost all of the track.

The chase is on. PIR's November race is the next to last race of the season before a Chase winner is crowned in Homestead, FL. This one mile track offers fans a great deal for the money, and it's always an exciting race for the drivers too.

Welcome race fans! Have a safe and fun weekend!
Posted by Peg at 8:26 AM