Are these cats goofy or what? 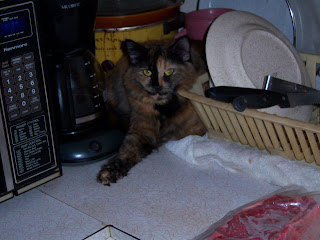 This is Puzzle, she is mama to Nilly and Gibby. She is kind of timid most of the time and finds herself anywhere she can to either hide or sleep. Lots of times I have to rescue her from under my friends bed, because Gibby chases her there, and I guess she doesn't much care for him anymore. 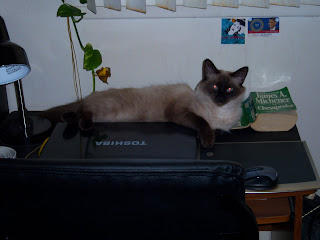 This is Nilly. She is Gibby's sister. She too likes to sleep in unusual places. In this pix she found herself a place behind my friends laptop computer and just before I snapped this pix she was laying her head on my book as if it was a pillow. 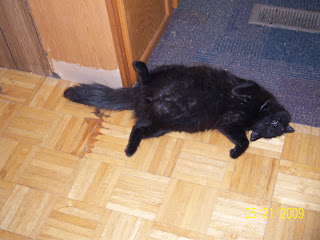 This is Gibby. He sleeps like this alot. I wondered if it was unusual for cats to sleep like this, but come to find out, it's not all that unusual. Recently, I took him to the vet and had him neutered...something absolutely necessary after I came to stay with my friend and his all night caterwalling made it nearly impossible to get any rest. My friend was close to letting him out just to get some peace. Since his neutering the caterwalling and carrying on has stopped and he's become a pretty good guy to have around. He will even sit in my lap (but only for a few seconds) or sit patiently beside me on the couch...something he never used to do.

I'm often surprised how kittenish all three can still be. They love to zoom around the apartment, especially after we've settled in for the night. Puzzle rarely enters the game, but will sit and watch at a descrete distance. The weather has finally begun to cool down and we can leave the front door open for a short while in the morning and early evenings. I've witnessed all three of them sitting side by side looking out the door. They remind me of guard cats, which I'm sure they are not! If someone were to even come close to the door they would scoot away and hide.

In the evenings, the neighbor cats will pass by to say 'hello' and have a good sniff. Mine will sometimes fluff up aggressively, but all is well when the outside neighbor moves away. There is no hissing or spitting through the steel screen door. I know my kids would love to go outside, but I just can't let that happen. There is too much traffic here and I'd be afraid they'd get chased into the streets by the other cats possibly to get hit or lost. Are they resigned to being kept inside? I don't think so, I think they're hopeful one day their human Mum will let them out again....

I don't mind that they romp and zoom at night (only occasionally when they land on me as they go by). I don't mind spending fifteen minutes every morning after the food is put down recovering kitty toys that have been pushed out of paws reach. At least I know they're doing what they like to do best...they're having the time of their lives. Zoom..zoom.
Posted by Peg at 1:08 PM