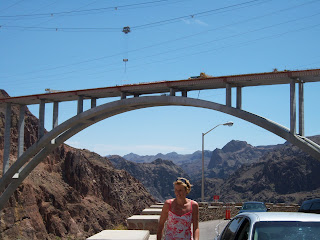 Yeah! Hooray! The Hoover Dam Bypass project is complete and set to open...(as reported by the Associated Press) I saw this blip on a local media outlet website this morning.

WoooHooo! Finally! The project began 8 years ago. It was originally designed to remove thru traffic from the dam, which is a tourist 'must see' if you're in the area, and to keep the dam safe from would-be terrorism attacks (after 9-11).

The dedication is today and is expected to have dignitaries from both NV and AZ as well as media crunch and who knows how many tourists. I liked the idea of the bypass from the get-go. The dam has been closed to big truck traffic since 9/11/2001 and this new bypass route is opening ahead of schedule, too! Yeah!

I've been over the dam in a big rig one time, and many other times in a four wheeler. I don't quite know how to describe the experience in the big rig, or the roadways leading to and leaving from the dam. But I'll give it a shot. The evening I crossed the dam in my big rig, the sun was going down and hindering my sight. It was hairy. I just crept along hoping and praying. A CB radio was a good tool to have on board. I had one and it was on. I could listen to the chatter and maybe miss the guy coming at me in another big rig, by not crossing paths at the same time on one of the tighter turns. It was nighmarish and nerve wracking. The roadway was/and is narrow and twisty. Traffic was slow, moving at a snails pace and sometimes stopped all together. This of course due to the tourists walking along the dam taking pix and the 25 mph speed limit. There was no getting across here in a timely manner. Two fifty-three's (a truckers term for two rigs with long trailers) couldn't pass each other at the same time on a tight turn without scraping sides, never mind a four wheeler who thought he was in a hurry and trying to pass where there just wasn't enough room to do so. Scary stuff this. 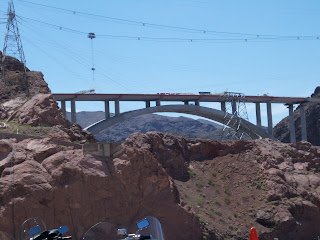 Anyway, I'm sidetracked again with musings from the past....

The new bridge will open next week according to the media report. The dam ittself will be closed to auto crossing traffic. There will be parking avaiable to stop and take pix.

I've been up to the construction site a number of times over the years, but have not worked on the project...wish I had, but that's beside the point... The new bridge is awesome and high above the Hoover Dam. I'd be just one of many who might not be able to use the new bridge because of it's height. I'm terrified of high places and this definitely meets the criteria for that fear. This new span is 890 feet above the Colorado River, half again higher than the Hoover Dam is already. Yikes! I might not be able to ride/drive across the new span because of this, which would ultimately be a shame because the views will be spectacular! Although, hopefully authorities will not allow traffic to stop to take pix on the new span.

I'm sure there will be more media coverage the next few weeks as things get back to normal after the official opening.... Maybe I'll even make the trip and have a crossing for myself. Shudder! I'll keep you posted.